People Who Are Scared Of Dogs 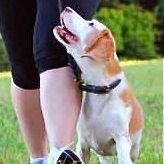