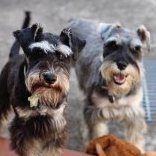 Dental - to pull or not to pull

27 posts in this topic