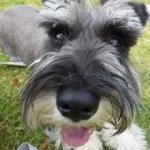 Thanks yes, mini schnauzer.  Well he seems to have elevated liver enzymes so he is not out of the wood just yet!  Thanks for the tip, I will be revisiting his diet and also check about the pancreatiti

I have a dog with liver problems. I've never used milk thistle, although it is a popular thing to use. Denamarin is the popular choice. There I have been very strict with what I feed my dog and do kee

TALK TO YOUR VET  about this. you cannot totally eliminate protein ...and there are different proteins. Get your vet, or a specialist vet to explain this to you - write it down, maybe ? Then you can w